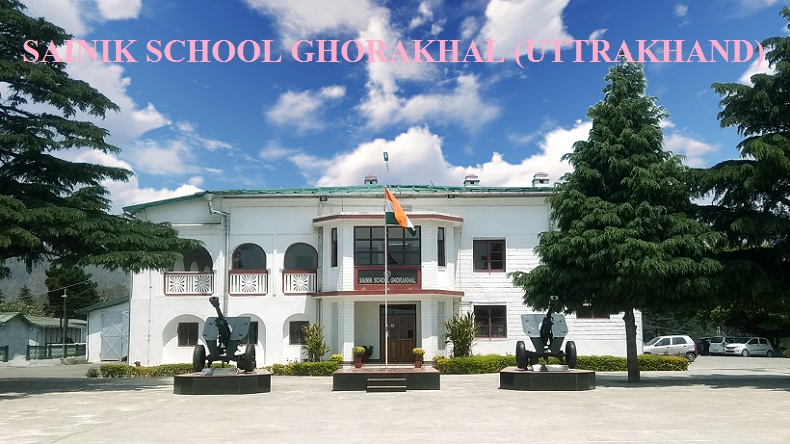 History: – Sainik School Ghorakhal, located near Nainital was established on 21 March 1966 on the magnificent estate of Nawab of Rampur. The name ‘Ghorakhal’ relates to the events in 1857 when a British General in a desperate bid to escape the revolutionaries of Awadh, strayed into this area, and his horse while drinking water from a nearby pond died, therefore the name Ghora (Horse) Khal (pond).

The Ghorakhal estate was presented to General Wheeler in 1870 by the British Rulers. In 1921, then Nawab of Rampur, Maj Gen, His Highness, Alijah, Amirul Umrah, Nawab, Sir Syed Mohammed Hamid Ali, Khan Bahadur, purchased this Estate. After the abolition of the privy purses in post-Independent India, the State Government (then Uttar Pradesh) purchased the Estate from the Nawab of Rampur in March 1964 and later Sainik School Ghorakhal was established on 21 March 1966.

Sainik School, Ghorakhal is a Sainik School established in 1966 by the Sainik Schools Society. It is situated at Ghorakhal, 4 km next to the town of Bhowali, at an altitude of about 6,000 feet (1,800 m) above sea level among the Kumaon hills in the Nainital district of Uttarakhand state of India.

Here on this page, we have provided all the essential details like eligibility criteria, age limit, education qualification, selection process, & how to apply online latest Vacancy, etc.

Note: – All Other Posts Qualification Details Given in the notification.

Shortlisted candidate’s selection will be made based on their performance in selection tests (Written Test, Interview & demonstration).

– No TA / DA will be possible for the candidates who participate in the selection tests.

Eligible and interested candidates may apply in the prescribed application format as available at the school website https://ssghorakhal.org/ with passport-size photography along with self-attested photocopies of Mark Sheets, Certificates, Caste Certificate, testimonials, self-address envelope unstamped and a DD for (UR/ OBC Rs. 500/-) for SC/ST Rs. 250/- (non-refundable) drawn in favor of “Principal, Sainik School Ghorakhal” payable at State Bank of India, Bhowali Branch Code 01352. should reach the following address:

NOTE:- Our page will not be responsible for any errors in advertising on the Vedikajobs.com job portal. Visit the official website of the Sainik School Ghorakhal Recruitment 2021 for complete information.